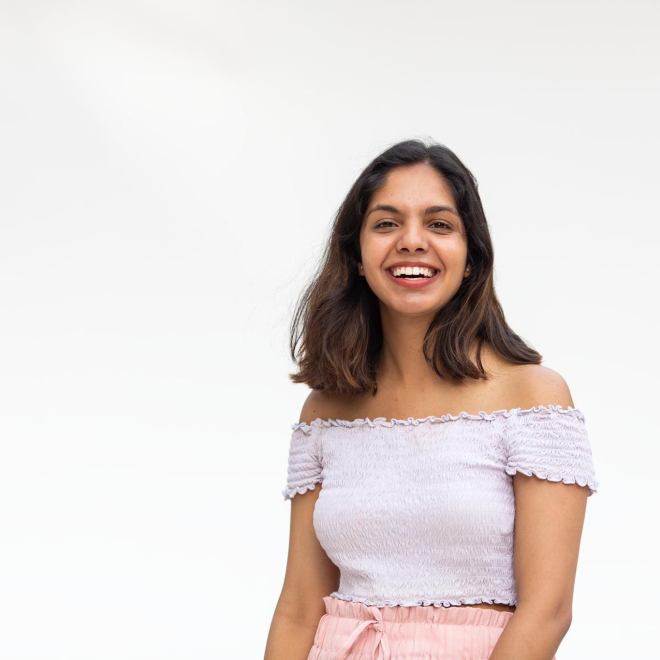 Humans of New York fans based in Abu Dhabi – rejoice! There’s an account following in its footsteps aptly called Humans of Abu Dhabi.

Chances are, you’ve seen its Instagram or Facebook account, filled with stories of individuals that we usually don’t think twice about: labourers, shop workers, fishermen, housekeepers, nannies, and so many others.

Now, meet the bubbly photographer behind the accounts, which are growing rapidly each day.

“The original Humans of Abu Dhabi was started a couple of years ago by a group of high school students as a project but then it became dormant as they went their separate ways. I reached out to them and they gave me their blessin. I took over and it’s been an amazing experience,” Nandini Kochar, a senior Film & Social Research student NYU Abu Dhabi.

A fan of Humans of New York (HONY), Nandini was excited to grab the chance to do something similar in her home away from home.

“I’ve enjoyed having the accounts but I’d be open to seeing where they’d go…I’ve been running the Facebook account for three years but things really took off when I started the Instagram account [on March 12] and then did the fishermen of Mina Zayed series,” she said, adding that she had emailed HONY founder Brandon Stanton a couple of years ago but “he’s obviously very busy so I’m not sure if he’s even had a chance to see it,” Nandini laughed.

Her next series was on the Mina Zayed shops surrounding the Mina Plaza building complex, which was demolished on November 27, 2020,

“When I first heard about the demolition, I felt that it was something that I needed to document what’s happening. I started going every day and building a relationship with the Minard community…I’m South Asian so I was able to speak with the shop owners and workers in a way that made them comfortable,” Kochar said.

As a result of her efforts, Nandini was able to document everything that was happening leading up to the demolition. Beyond that, she built a bond with the people that she spoke to that extended beyond interviewer-interviewee.

“Some men bought me lunch and some called their families and I spoke with them on the phone. I also brought some of my friends along who wanted to buy plants in order to support the shopkeepers. It was a great way to build relationships with everyone,” she said.

It took a while for Nandini to find her rhythm when she started out in Abu Dhabi, however, which resulted in an evolution in her photography style.

“I remember I was taking a photograph of a man unloading a wheelbarrow from a truck and he saw me and gave this look before telling me to take the wheelbarrow off the truck. It startled me and made me aware of my privilege…and reminded me that it is important to speak with people and build a connection before taking their photograph,” she said.

Since then, Kochar would approach people and introduce herself and HOAD before asking if they would be interested in being featured. Afterwards, she would record their conversations and photograph them.

“Ethical photography is very important for me….it’s one of the reasons why my photography style shifted from street photography to portrait photography as it’s more initimate and allows me to document people’s stories in an organic way and with their consent,” she explained, adding: “I’ve started speaking anyone I can, for example, a taxi driver, to learn more about them and understand their experiences. I learn something new with each interaction. which adds

“I’d love to focus on stories of women since most of my interviews have been about men lately…also, I’d like to do one-off interviews because there’s a lot of beauty in those and there isn’t always an opportunity to do a series,” Nandini said.

The university student is currently focused on two documentaries: the first is on the experiences of domestic workers and what motherhood means to them, and the second is on the shop owners and workers of the Mina area.

Nandini is also focused on finding a successor to take over HOAD after she graduates in May 2021.

“It would be cool to see how the next person brings their perspective to the accounts…that’s one thing I’m trying to focus on right now,” she said, smiling.

It’s been a rather hectic journey as Nandini did her best to balance HOAD, her studies, and other activities and responsibilities.

“There were times when I couldn’t go out and shoot people because I had to focus on my studies…balancing everything was tricky but I’m lucky that I’ve got supportive family and friends who also give their persepective and feedback that helped me hone my skills,” she said.

One thing that Nandini would love to accomplish before graduating when it comes to HOAD?

“I’d love to be able to exhibit my work, it would be a great way to end my journey,” she said, smiling.