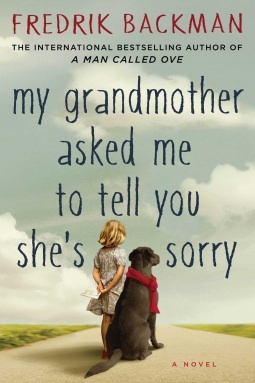 REVIEW: my grandmother ASKED ME to TELL YOU she’s sorry

This novel has been on our To Be Read pile for a while so we thought it would be perfect to review it for World Mental Health Day. Fredrick Backman’s weaving story touches on themes of grief, loss, anger, depression, joy … essentially a wide range of emotions, which makes it a fitting selection.

Elsa is seven years old and different. Her grandmother is seventy-seven years old and crazy—as in standing-on-the-balcony-firing-paintball-guns-at-strangers crazy. She is also Elsa’s best, and only, friend. At night Elsa takes refuge in her grandmother’s stories, in the Land-of-Almost-Awake and the Kingdom of Miamas, where everybody is different and nobody needs to be normal.

When Elsa’s grandmother dies and leaves behind a series of letters apologizing to people she has wronged, Elsa’s greatest adventure begins. Her grandmother’s instructions lead her to an apartment building full of drunks, monsters, attack dogs, and old crones but also to the truth about fairy tales and kingdoms and a grandmother like no other.

My Grandmother Asked Me to Tell You She’s Sorry is told with the same comic accuracy and beating heart as Fredrik Backman’s bestselling debut novel, A Man Called Ove. It is a story about life and death and one of the most important human rights: the right to be different.

This is not a story that is easily understood in one reading. You will find yourself re-reading some passages or reaching for a notebook to write down and track each character, their relationship to each other and, in some cases, what’s happening, when, and why.

There are times when the story gets confusing as Elsa navigates between the imaginary Land of Almost Awake and the Kingdom of Miamas that she created with her grandmother, and the real world.

Characters blend between those in the imaginary world and their real-life counterparts but once you start connecting the dots, everything begins to make sense.

There are several laugh-out-loud moments, such as Grandmother shooting paintballs from her balcony and…[no spoilers!] along with moments that are truly heartbreaking, such as when it’s revealed how she died.

Fredrick also drops many pearls of wisdom throughout the story like this gem, which is something that we should keep in mind during these polarising times: “Elsa decides that even if people she likes have been shits on earlier occasions, she has to learn to carry on liking them. You’d quickly run out of people if you had to disqualify all those who at some point have been shits.”

My Grandmother is a book that you will either love or hate (making the above quote rather ironic). Regardless of which camp you end up in, you will find yourself thinking about how convoluted the grieving process is and the importance of letting yourself / others work through it in your / their way. It will also remind you that people aren’t what they always appear to be and that we all have hidden depths and secret histories that may emerge and shift people’s perspectives when we’re gone.