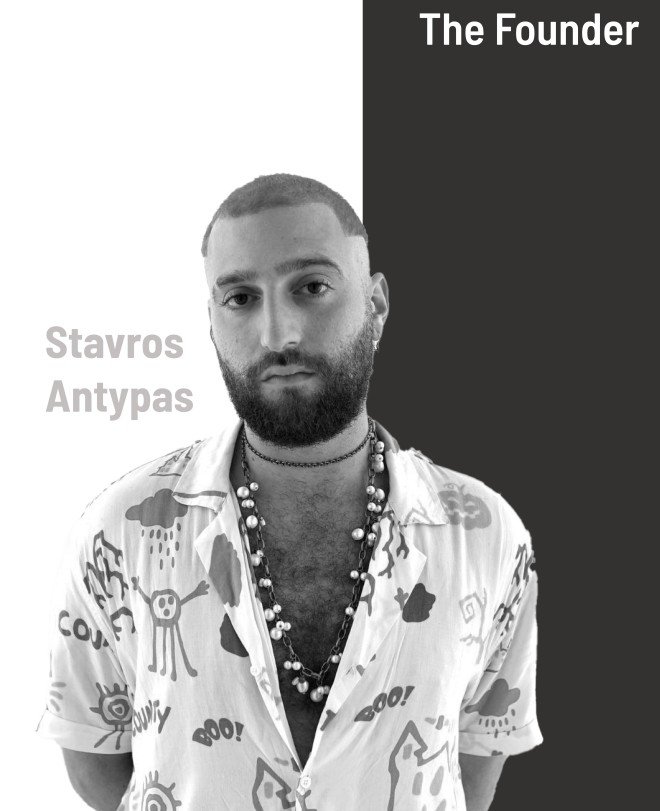 Since 2017, Tawahadna has been inviting and encouraging people to discover the diverse talents of female artists in the Middle East. The independent production house creates documentary ‘episodes’ that are then screened in art galleries in order to create a harmonious journey into each artist’s mind.

Creativity Undefined spoke with Tawahadna’s endearing founder, Stavros Antpas, who was full of energy despite still recovering from contracting COVID19, to talk about its ongoing projects, peoples’ reactions to a male founder of a female-focused organisation, and how the pandemic is impacting the region’s creative community.

How’s the pandemic treating you?

I’m actually still recovering from getting COVID19. It’s been exhausting but its almost over.

Oh no! Hope that you have a full recovery soon.

Thanks, the worst is over…I’m focusing right now on getting back to work with my team to continue filiming our documentary series and raising awareness about it so we can continue supporting amazing artists.

You have a unique storytelling style, what inspired you to go in that direction?

It was a very deliberate choice to use a funky style because I noticed that as Arabs, we’re very defensive and traditional about what is ‘good’ art. I wanted to show that you can’t define success in any one specific way but that anyone can be a successful artist.

Great philosophy. Why did you choose to focus on female artists?

Well, I’ve always had difficulty with chasing my passions due to my conservative background but with all my issues, I was still in a better place by virtue of being a man, to put it bluntly.

I started thinking about how more challenging it is for women in the region to pursue creative passions and realised that I couldn’t imagine just how much they must face. But I could do something, which is shine a spotlight on them and their amazing work. This isn’t about wrong or right though, it’s about changing opportunities and creating a big ripple effect.

That’s great! But it can’t be easy explaining that when people discover that you’re its founder.

Oh yeah [laughs]. I get criticised all the time…I actually lost an opportunity in 2018 because the organisation that contacted me discovered that I’m neither an Emirati nor a woman. Then I was approached with another opportunity but to be a co-director in name only, I wouldn’t get an creative control so I turned it down. Things are a bit better today but we still face some challenges.

What are some of your goals for Tawahadna?

I’m hoping to create a partnership with Netflix or Amazon Prime or anoyone who is willing to support us. We want to spread the news of these amazing women as far as possible.

For me, personally, the challenge with doing that is figuring out how to define Tawahadna further and learn about distribution, licensing, royalties…everything, really because I’m trying to figure out how make it profitable so it lasts around for a long time.

Have you tried approaching them?

Actually, OSN wanted to buy Tawahadna as a concept. It was launching Asli [Studios in 2018. It was touted as the first combined production, licensing, education and multifunctional workspace ecosystem] and I was one of the founding team leaders – I was hired to be its International Community Manager – but around that time, Netflix began streaming in Egypt. OSN partnered with them so we we never truly got off the ground…within six months we were shut down.

It took me a long time to gather my courage afterwards to start working on my own stuff again, I’m grateful that I now have a great team that helps me with everything and keeps me grounded.

Looking back, how has the journey been for you?

It’s been…something [laughs]. I actually got a degree in architecture first before deciding to pursue studying filmmaking. This all began as a project for my final year. We managed to interview Maryam Al Zaabi [a leading Emirati feminist Contemporary Figurative artist], who graciously put her life on hold for a few days and trusted us even though we were only university students. I’ll always be grateful to her for that opportunity because without her, none of this would have started.

After we were done, I decided that I wanted to see how it would look on a big screen.

So, what did you do?

I found a gallery in Al Serkal [Dubai] on October 1, 2017 – I remember that day perfectly – and managed to speak to the owner. She agreed to let me screen the finished film if I took down all the artwork and set up everything for the screening in one day.

It was exhausting but I managed to do that…I also decided that I wanted to help showcase indie artists so I found a couple who were willing to be a part of the event. It was the ‘biggest small exhibition’ [laughs] … I got the projector, chairs, and speakers. It was an extremely DIY event but it was so beautiful. I only got 50 chairs because I figured that most of the people who’d come to see it would be my family.

The next thing I knew, 200 people were lined up outside the gallery to see it! I was shocked when I arrived and saw the crowd….I had to explain that there was limited seating and that it was a 15 minute screening. They were fine with it and so we have two back-to-back screenings with Q&A sessions. It was great – plus, all the artwork on display got sold that night [laughs].

In each session, I kept getting asked ‘when’s episode two coming out?’

When did you start working on the next episode?

Two year later [laughs]. I went back to architecture for a bit first becuase I wanted to focus on being an enterpreneur. In January 2020, I moved to the Kingdom of Saudi Arabia before Sheraa [an enterpreneurship incubator based in Sharjah] invited me to pitch for a place in their programme, which came with a $10,000 cash grant.

I flew in to pitch and flew back out before being told that I had secured a place in their six-week programme. At its end, I gave a presentation about Tawahadna and won the grant.

Congratulations! What have you been up to since then?

Thanks! I’ve been focusing on a digital launch for Tawahadna. I’ve also partnered up with Seeing Things [a Dubai-based studio] and am shooting interviews with artists from the MENA and the world on Zoom for Dialogue and Connections. I’m also working on filming Emirati artists for upcoming episodes.

There isn’t enough support for indie creators, we need to have more conversations around that because right now, there isn’t room to understand the indie community and appreciate it.

We’re all doing our part as best we can…I recently helped to put together a charity film screening for the Beirut Blast where we raised Dh18,000.

How do you think this will change post-pandemic?

What’s cool is that people are pushing boundaries right now, which means there’s a lot of creative stuff that’s on the internet. We’re also becoming more digitally aware and educated about the best ways to communicate online versus traditional media so I think we’re going to see a bigger surge of online content.

Also, I think that post-COVID19, we’re going to move on and go back to normal life because we’re good at moving on, especially after tough situations. We’re all craving love and connection…staying at home is harder than we realised because we’re not designed to be this isolated, even with our current technoogy.